Petaling Jaya, 4 January 2022: Kicking off the new year, REV Media Group (RMG) through its Gaming Network, IGN SEA is excited to bring the first esports tournament of the year Pour Femme known as Squad Up: Athena!

Squad Up made its debut in 2020 with PlayerUnknown’s Battlegrounds (PUBG) Squad Up 2020 tournament and the Squad Up: Athena is the continuation of the esports tournament series, championing women gamers across Southeast Asia.

Athena, often associated with a Greek myth, is an ancient Greek goddess of wisdom, practical skills and prudent warfare and that is exactly what the tournament is looking for!

Squad Up: Athena is an open regional qualification tournament that will lead to an ALL-STAR invitational tournament where only one team will be crowned as champion from a total of 24 teams (12 from qualifiers, 12 invited) playing Mobile Legends: Bang Bang. 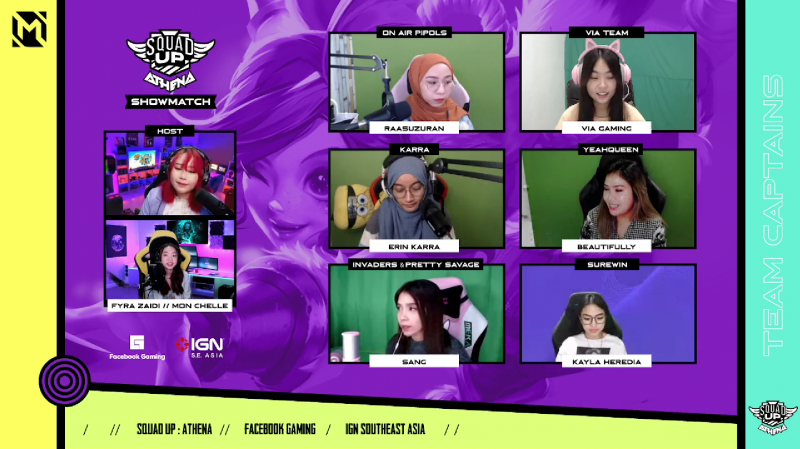 The search for the ultimate Athena started in December 2021 with the open qualifier round which was held from 18th to 20th December 2021, seeing amazing team playoffs from regional participating countries, Malaysia, Singapore, Indonesia and Philippines to book themselves a spot in the nationals round before the best is selected to battle in the regional final round.

A follow-up showmatch was showcased online by top Facebook Gaming creators across Southeast Asia (https://fb.gg/v/acnbIxo7IL/) on 21st December 2021 to let the audience know which teams managed to qualify for the national tournament and the invited teams for the finale.

Not the typical weekend esports event, Squad Up: Athena, the first female esports tournament will take place from 7th to 9th January for Malaysia, Indonesia and Philippines tournament rounds respectively, and the finale will be on 15th January 2022.

“We believe that the women empowerment tournament on IGN SEA will attract gamers across both genders and will push barriers in the local esports scene,” he added.

RMG’s Chief Operations Officer, Nicholas Sagau added, “The recent pandemic has affected many industries including esports. In light of the current situation, we’re confident that the esports industry will be bouncing back and rejoicing again and the public can expect to see more interesting esports initiatives from us down the road.

“Squad Up: Athena is the first of many more initiatives by the group to reignite the momentum of esports moving forward. We hope to see as many people as possible joining hands together with our efforts,” he added.

Get ready in front of any of your favourite devices, sit back, relax and enjoy the match! Get more information on Squad Up: Athena or any gaming related matters at https://sea.ign.com/. Game on! *Also watch the space for Squad Up: Open and Merdeka edition soon!

About Squad Up Athena

REV Media Group is the leading digital publisher in Malaysia, representing over 30 top authority brands with an extensive distribution network that reaches out to more than 15 million people each month, about 75% of Malaysia’s internet population. At REV Media Group, we believe in harnessing the power of data and technology to deliver engaging content that matters the most to our audience across multiple languages and platforms comprising News, Entertainment, Lifestyle, Technology and more. Leveraging our comprehensive platform and reach, we strive to elevate brands to greater heights through influential, data-driven digital marketing solutions and exceptional content aimed at winning the hearts of consumers.